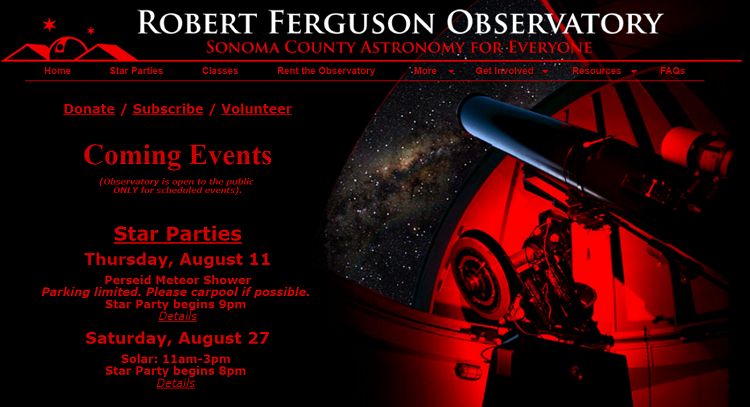 The Sonoma Valley yields many gems that seem to go under the radar. Up on Sugarloaf Ridge in the Mayacamas mountain range, just up from Jack London State Park, is the Robert Ferguson Observatory (RFO). A true treasure for local star gazers in the bay area, and much less traveled than Oakland’s Chabot Space & Science Center, the RFO hosts star gazing parties, and monthly get togethers.

The RFO is surrounded by wine country on all sides, so if you’re looking for something else to do other than wine tasting in Sonoma, there’s the observatory. Just make sure to check the RFO’s calendar before you come up. And if you’re coming in from out of the area, consider camping up in the Sugarloaf State Park it’s year-round and beautiful!

In addition to their star gazing parties, they offer classes, and volunteer opportunities. If you’re feeling swanky, you can also rent out the observatory. Tey have rotating events all year, so be sure to check out their calendar of events.