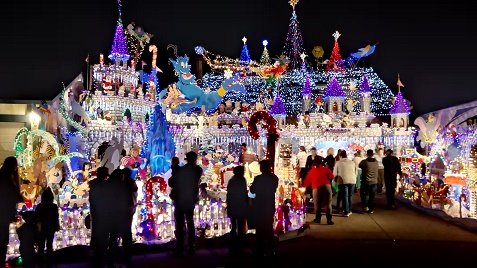 The Weaver Winter Wonderland is a thing here, but this was my first time out to go see it. They’ve won The Great Christmas Light Fight, featured on ABC, along with winning other awards locally.


It’s spectacular. You actually feel as though you drove to Disneyland, and were walking through Toon Town or Main Street — Minus the huge ticket cost, hotel, parking, crowds (ehh, sorta), etc. So yeah, Disney is a huge part of their theme, but certainly not exclusive, they have characters from just about every Holiday movie, down to the details. We were looking at the Dalmatians on the front lawn and joked how there weren’t 101, but as we looked around it became apparent that there were dogs hidden all over the spread of stuff — so maybe we were wrong.

I’d say that the 20-30 foot Genie from Aladdin was the pinnacle of the spread, but I can’t say that, there’s just too much well placed characters and subtleties here. Everything works and is balanced and doesn’t have a too crowded feel. I’m starting to sound like an expert on Christmas lights. I’m not, it was just a fun place to check out.

Grab some hot cocoa and head out to the Weaver Winter Wonderland at 1190 Cielo Cir, Rohnert Park, CA. And check em out on Facebook.